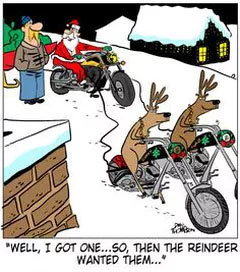 Merry Christmas!  Can you believe it’s the most wonderful time of the year already? I tell ya, the more gray you get in your hair (or for some, the more hair you lose) the faster the year just seems to fly by.

Of course, part of Christmas seeming to get here faster is because companies are putting out their Christmas decorations and products earlier and earlier every year. In fact, this year I began to see Christmas trees and lights in stores before Halloween was even here.

You ever wondered why the big retail stores start Christmas so early?

The reason is found in the math. The fact is that Americans spend 70% of their discretionary dollars between Halloween and New Year’s Day. If a family has $2000 in discretionary funds each year, $1,400 of that amount on average is spent during this time of year. (Discretionary money is what’s left over after the bills are paid and all responsibilities have been taken care of; it’s the money that a person or family can spend at their ‘discretion’. )

The majority, if not all, of our industry’s sales in every department in the dealership come from discretionary dollars. We’re a big toy store.

Many of our clients have done the math: 70% of discretionary dollars are spent in November and December & most of their business comes from discretionary dollars. This means they can’t back off their marketing too much during these two months. They understand they have the power, through good marketing, to sway shoppers to spend some of those dollars getting the powersports enthusiasts on their list, and themselves, a Christmas present they’d really like.

There are lots of reasons to give people a reason to shop with you this time of year… Black Friday, Chrome Saturday, Cyber Monday (you can actually drive traffic into the store with this), 12 Days of Christmas, or a single Christmas event on a Saturday in December (12/3, 12/10, 12/17, or 12/24).

Have you ever heard of the 13th Month?

The week between Christmas and New Year’s Day is referred to as the 13th Month because retailers will often do a month’s worth of business during that single week. People are spending their gift cards and Christmas cash. They’re returning the gifts they didn’t want so they can buy something they like.

A popular campaign we’ve implemented for dealers during the 13th Month is ‘What Santa Forgot’. The focus is ‘Get What You Really Wanted for Christmas!’ This campaign can also be done the first or second week of January.

Before doing business with us, some of our clients had stopped their marketing in November and December. They had tried everything to compete with the big box retailers and failed. Nothing seemed to work.

The truth is you can’t compete with the millions of dollars being spent on TV, Radio, Newspaper and other mass media. You’re just a drop in the ocean.

You can, however, target the enthusiasts in your market area (both past customers and conquest riders) with a Sharp Shooter campaign that gets traffic in your store and generates leads for every department. This gives your staff people to work with (and sell to) and leads to follow-up with. I’ve heard from dealers that October and November to date have been soft. We experienced this with the big election in 2008, when there was lots of uncertainty as Obama was elected. This year, we’ve experienced something similar with another big election, but it’s over.

In 2008, business picked up in December and 2009 was a good year. Trump will be our next president. The general consensus I hear from people is that they believe Trump will be good for small-to-medium sized businesses, and that’s what the majority of our economy is built on.