Ask Tory: What is Review Gating?

As you may have read in the last Ultra Marketing Machine Newsletter, Google recently released an update to their ‘Maps User Contributed Content Policy’ and it greatly impacted reviews. The biggest change has to do with what’s called Review Gating. 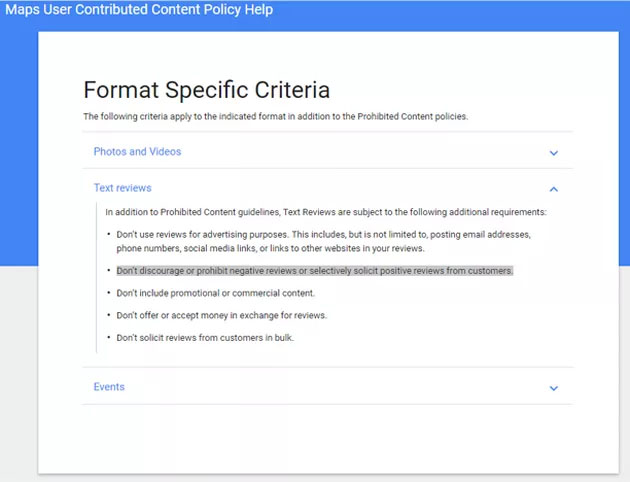 To address this, Google’s guideline says, “Don’t discourage or prohibit negative reviews or selectively solicit positive reviews from customers.” This means a business can’t ask customers for feedback on their experience in a way that separates potential good reviews from bad, that’s Review Gating.

Not abiding by this new guideline can lead to catastrophic consequences, like ALL of your Google reviews being deleted. Think that’s not possible? It is. In fact, several years ago Google came out with a new guideline that prohibited reviews being submitted by the same IP address. At the time, it was a big deal to be close to 100 Google reviews, and the dealers that had reached this level were asking for reviews by handing customers an iPad while they were in the dealership. Google didn’t want businesses putting pressure on customers by standing with them while they wrote the review. The end result was what we call a ‘Google Slap’… they removed ALL of their reviews. They’ll do it for this as well.

This is one of the reasons we’ve invested a lot of time and resources into our Reviews and Rankings Mobile App. This app gives your front-line staff the ability to take a picture of their customer at the point of purchase and email it to them. It will also post the picture to Facebook automatically, and then send a review request the next day. We’re close to releasing an update to the Reviews and Rankings App that includes the ability to also send a review request via text message, which studies show increases review conversions.

It’s no secret that nearly 100% of prospects & customers do research online before choosing a product or a dealership, but did you know reviews also help prospects choose a sales person? As your front-line staff utilizes the Reviews and Rankings App, it grows their personal reviews. If they sent the review request, they get credit for the dealership review. It doesn’t take long for folks to start coming in to the dealership asking for a staff member by name that they’ve never met before. In fact, research shows that 84% of people trust online reviews as much or more than they trust a referral from a friend.

If increased reviews (that avoid the Google Slap) & and an easy system to put customer photos on Facebook aren’t enough value to give the Reviews and Rankings App a try, here are some other benefits:

Whether you’re already a client or not, you’re invited to join a webinar covering the details of our Reviews and Rankings App:

When: Tuesdays in July

See you on the webinar,